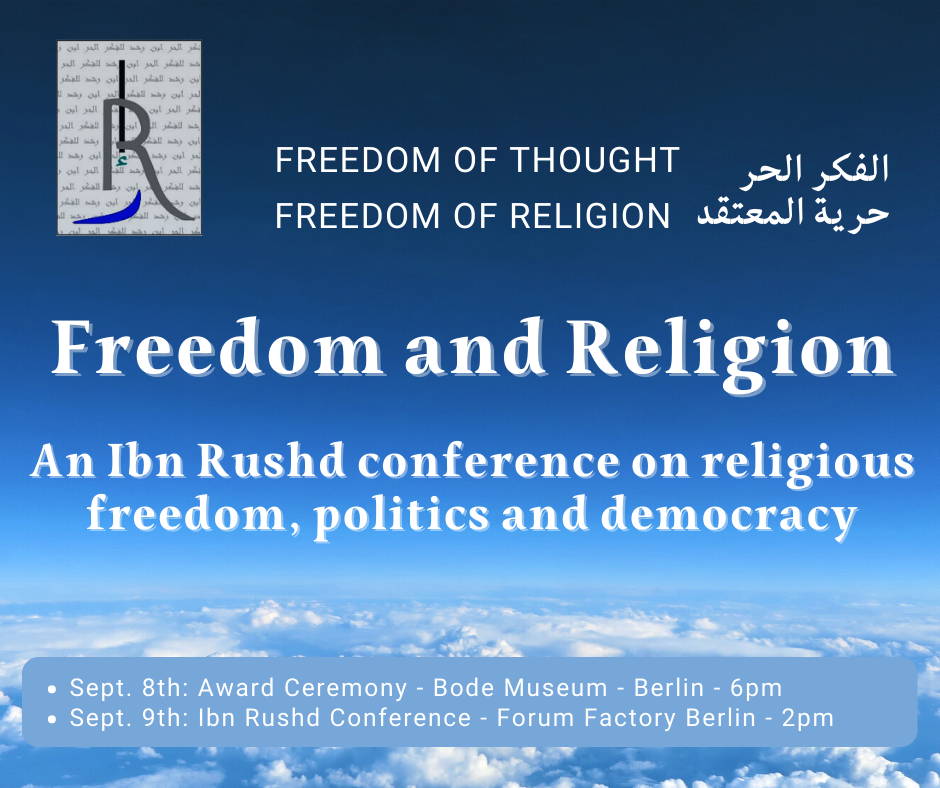 we have the great pleasure to invite to our conference ‘Freedom and Religion’, taking place on Sept 9 from 14hrs at Forum Factory in Berlin-Kreuzberg who are cooperating with us also on this event.

We would like to say special thanks also to the Friedrich-Ebert-Stiftung (FES) for cooperating with us and supporting the conference.

Details on the programme and speakers you can find below.

You are welcome to come to the whole conference or only to some sessions. Some talks and panels will be in Arabic, some in English, some in German. Questions and contributions to the discussions can also be made in those languages; as always, we will translate as best we can, in this case especially between Arabic and German.

And after the talks and panels will have given you plenty of food for thought, there will be some soul food on the oriental buffet which is generously supported by El Mandi Restaurant with Yemeni specialties and topped up with some Syrian mezze and dishes.

14h00 – Why did freedom of religions differ through the ages?

The history of religions tells us that freedom of religion was not at the same level of practice in the different eras of history: ancient, medieval, modern and contemporary. The lecture will present this and will look for the reasons that led to this and what resulted from it.

The Indian leader M. K. Gandhi (1869-1948) impacted the world through his personal and public acts. The Ghandi presented by Issar in this short excursus is not so much the individual, but the Gandhi as a social text, the social phenomenon that he became. Issar I will examine how religion and modernity shaped his work, and how his approach to food not only shaped post/colonial India but may explain present-day India’s struggle with questions of desire, belonging, and caste.

17h30 – The State, Religion and Pluralism

Which role do the ongoing political conflicts in Syria and Lebanon play in rejecting the civil status law that guarantees civil marriage is the main focus of Aliaa Ahmed in this panel. Yahya Alem presents a North African perspective on the debates on the controversial and ambiguous relationship between religion and state, and the problem of pluralism in modern Arab thought and reality.

Freedom of religion, freedom from religion, freedom for religion – these are the differing needs people experience. Religion and freedom – what is the inter-relation between these two terms, and can they be combined? What does freedom mean, what does religion mean – for and in the life of the individual? Where does the society come in, and where the state, to ensure everybody can live their choices freely? How and when did these questions affect the lives of those most involved with this year’s Ibn Rushd Prize?

Contributing to this conference (listed in order of their contributions):

Lucky Issar is an independent researcher and literary scholar. He holds a PhD from Freie Universität Berlin. He has taught and studied in three countries: India, Denmark, and Germany. His research interests include gender and queer studies and queer theory that focuses on India. Currently, he is working on a book titled ‘Narratives of Queer Desire in Modern Indian Fiction‘. He has contributed scholarly articles, essays, and book reviews to various publications.

Alia Ahmed is a feminist researcher and writer, and activist. She holds a bachelor’s degree in sociology. She published many articles on feminism and intersectionality in the Syrian context,  the role of civil society and feminism in changing the actual situation of Syrian women in the current context.

Salam Said holds a PhD. in Economics and Social Sciences from the University of Bremen is a policy adviser at the Africa and Middle East Department of Friedrich-Ebert-Stiftung (FES) in Berlin. Dr Said is the desk officer for the countries Lebanon, Libya and Syria, and responsible for political feminism in the MONA Region. worked as a researcher with FES and Centre for Syrian Studies in St. Andres University, and has lectured at different German universities, currently at the Karlsruhe institute for Technology KIT. Her work focused on Arab economies and foreign trade relations, political economy of in the Arb region as well as the Syrian conflict and economic reconstruction.

Sarhan Dhouib is a research assistant at the Institute of Philosophy at the University of Hildesheim, holding a PhD from the University of Bremen. He won the Goethe-Institut’s Young Scientists Award for Philosophy and is a member of the Arab-German Young Academy (AGYA) as well as a research fellow of the Feodor Lynen Fellowship of the Alexander von Humboldt Foundation. His main research interests are German Idealism, Political Philosophy, Arab-Islamic Philosophy, Intercultural Philosophy. His many publications include over thirty contributions to Philosophy in the Islamic World. Vol. 4/1: 19th-20th century, ed. by Anke von Kügelgen. (Grundriss der Geschichte der Philosophie), Basel: Schwabe-Verlag (2021) as well as the volumes published by Velbrück Wissenschaft, most recently ‘Philosophieren‘ in der Diktatur (ed., 2022).

Stefan Maneval is a scholar of Middle Eastern and Islamic studies, holding a PhD from Freie Universität Berlin. He is a member of the Arab-German Young Academy of Sciences and Humanities (AGYA) and co-founder of Falschrum Books, a Berlin-based publishing house on the intersection of art, literature and research. He is the author of New Islamic Urbanism: The Architecture of Public and Private Space in Jeddah, Saudi Arabia (London: UCL Press, 2019), the editor of Faith Travels by Streetcar: Norms and Objects in Religious and Secular Contexts (Berlin: Falschrum, 2021) and co-editor of Forms of Migration: Global Perspectives of Im/migrant Art and Literature (with Jennifer A. Reimer, Berlin: Falschrum, 2022). He currently holds the position of visiting professor of Islamic Studies at Freie Universität Berlin.

Maher Massoud holds a Masters in Western Philosophy from Damascus University. Until 2017, he was a professor at the French Institute of the Near East (IFPO) in Beirut. In 2016 he won the EU’s Samir Kassir Award for Freedom of the Press and in 2017 the Hussein al-Aoudat Prize for Arab Press. He is a guest researcher at the Zentrum Moderner Orient, Berlin, where he works on “Tyranny and Sectarianism in Syria.”

Dr. Elizabeth Suzanne Kassab is a member of this year’s jury for the Ibn Rushd Prize. She is Associate Professor of Philosophy at the Doha Institute for Graduate Studies and worked as visiting professor, visiting scholar, and research fellow in various prestigious academic institutions across Europe, Lebanon, and the United States. Her research interests concern Western and post-colonial philosophies of culture, cultural crisis, and critique, with a particular focus on contemporary Arab thought, philosophy, and culture. In her book “Contemporary Arab Thought: Cultural Critique in Comparative Perspective” (Columbia University Press, 2010) she explores and questions the relationship between politics and cultural crisis in the intellectual debate, employing a comparative approach between the Arab world and other postcolonial contexts. Her most recent book is “Enlightenment on the Eve of Revolution: The Egyptian and Syrian Debates” (Columbia University Press, 2019).

Nayla Tabbara is, together with Saad Salloum, the winner of this year’s Ibn Rushd Prize.  She is a founding member and president of a Adyan, Foundation for Diversity, Solidarity and Human Dignity. Nayla holds PhD in Science of Religions from the Ecole Pratique des Hautes Etudes (Sorbonne-Paris) and Saint Joseph University (Beirut) and works as a university professor in Religious and Islamic Studies; she also work on curricula development on multifaith education, inclusive citizenship and Freedom of Religion and Belief. As a Muslim woman theologian, she published in the fields of Islamic theology of religious diversity and Islamic Feminism (namely her book book ‚L’islam pensé par une femme‘, Bayard, 2018), Education on interreligious and intercultural diversity, Qur’anic interpretation and Sufism.

Saad Salloum is, together with Nayla Tabbara, the winner of this year’s Ibn Rushd Prize. He is an assistant professor of political science at the College of Political Science at Al-Mustansiriya University, Baghdad. He cofounded the Christian-Muslim Dialogue Initiative 2010 , the Iraqi Council for Interfaith Dialogue 2013, the National Center for Countering Hate Speeches 2018, the Institute for Religious Diversity Studies in Baghdad 2019, and the Institute for Diversity Journalism in Iraq 2020. Saad is an advocate for ethnic and religious minorities and chairs the Masarat Foundation for Cultural and Media Development. Among his many publications are ‘Policies and Ethnicities in Iraq: From the Ottomans to the Present‘, 2014; ‘Unity in Diversity‘, 2015; ’Yazidis in Iraq‘, 2016; ‘Freedom of religion and belief of minorities‘, 2017; ‘Iraqi Media and Religious Diversity Issues‘, 2018; ‘The End of Diversity in Iraq‘, 2019; ’Ongoing Genocide‘, 2022

Cora Josting is the current chairwoman of the Ibn Rushd Fund and a cofounder in 1998. Majoring in North American Studies, she since translated her knowledge to a MENA portfolio of topics. She worked in developing the Ibn Rushd Prize, initiated the Ibn Rushd Lectures (2011) and the Diwan al-Falsafa (2015). Cora created and executed Dou Lil Moustaqbal, a project with Refugee Women, funded by the German Ministry of Education as part of an integration + empowerment program (2018), co- curated The Missing Journey of Ibn Battuta (2016) and Al Qafila, the Balkan Route of Refugees (2018), both concert tours through Europe to showcase the beauty of Arab culture and music to a European audience. Her most recent larger project was the Zait wa: Zaʕtar Festival for Palestinian Arts & Culture (2020-2021), which she initiated, curated and organized. One of its programme items, the photo exhibition produced with teenagers in Gaza ‘Eyes of Gaza’, is still touring Germany and will open in Stuttgart in October 2022.

Amany Abdelrazek- Alsiefy is a member of the board of the Ibn Rushd Fund and has organized many Diwan al-Falsafas and Ibn Rushd Lectures. She holds a PhD from Freie Universität Berlin (2022). Her research interests include gender studies, secularisation and fashion theories focusing on women from the MENA region. She has contributed scholarly articles, essays, and book reviews to various publications in Arabic and English. Currently, she is working on a book titled “Dressing the Feminine Body in Modern Egypt: Fashion, Faith and Class”.

One thought on “Freedom and Religion: An Ibn Rushd Conference on Religious Freedom, Politics and Democracy”