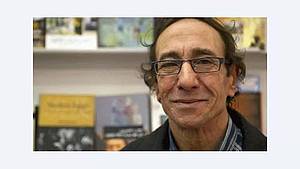 Dear friends of freedom of thought, in the Arab World and elsewhere,

We cordially invite you to an Ibn Rushd Lecture with the Egyptian writer and publisher Mohamed Hashem on:

The Egyptian writer and publisher Mohamed Hashem founded his independent publishing house Dar Merit in Cairo in 1998, which since its inception massively changed the contemporary literary scene in Egypt. This was mainly because Merit supported and encouraged new writers, often being the first to publish them. Almost unnoticed and methodical, Hashem assembled an impressive group of authors, and made sure their works were published as paperbacks at affordable prices. When you visited him at the first address of his publishing house in the old peeling building on Qasr el-Nil Street, you’d find two small, smoke-filled offices crammed with books up to the ceiling on each wall, often populated almost equally by authors and friends.

Born in 1958 in Tanta in the Northern Nile Delta, Hashem first worked as a journalist and author of a collection of short stories and a novel, Mala’eb Maftouha [Open Playgrounds], published in 2004.
In 2006, he was awarded the Jeri Laber International Freedom to Publish Award by the Association of American Publishers’ International Freedom to Publish Committee (IFTP), and in 2011 he won the Hermann Kesten Prize of the German PEN Club.

The Lecture will be in Arabic. A consecuritve translation German-Arabic will be available for the discussion after the lecture.