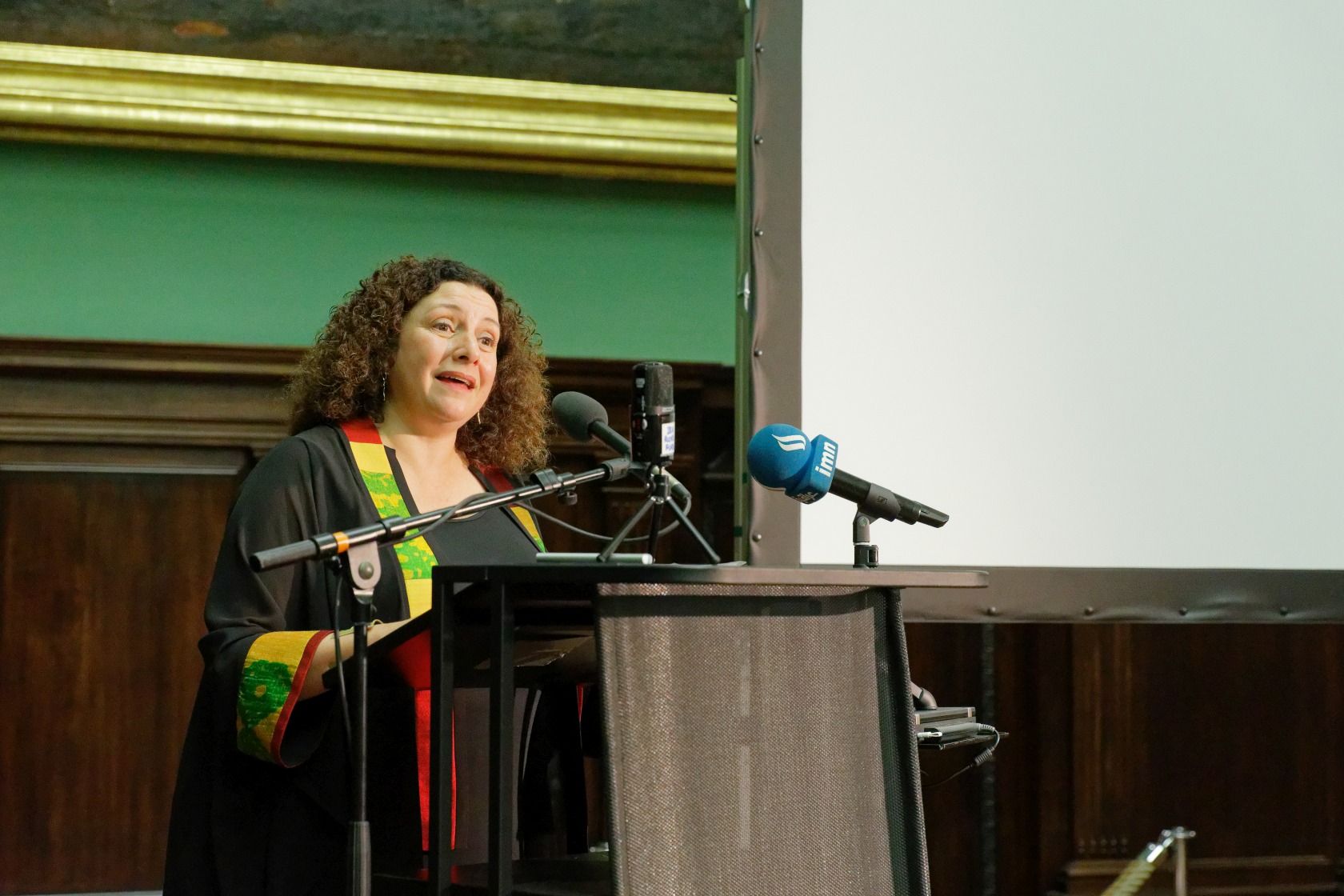 It is an honor to be receiving the Ibn Rushd Prize for both my personal work and on behalf of Adyan, the foundation for diversity, solidarity and human dignity that we co-founded in Lebanon 16 years ago, and that has been relentlessly working for inclusive citizenship, for freedom of religion and belief, for education on diversity, for religious social responsibility and for spiritual solidarity, in the MENA region.
It is also an honor to be a recipient with Saad Salloum and the Masarat organization, for together, and along other organizations and persons in the Middle East, we are creating a wave and spreading a culture that appreciates diversity, and that fights for every person’s right to believe and practice freely and to speak up their conscience.
We both come from a part of the world where we are living hardship over hardship, where structural problems add up each day, while the value of human life decreases on a daily basis too. Our people are suffering from corruption, from hunger, from lack of medical care, and our own powerlessness is a burden we carry each day.
Yet, in parallel, every mind that is slightly enlightened through our work, every heart that overcomes fear and opens up to persons from other faiths and other belongings, every young person that starts to believe in their role and voice as active citizens in our contexts continually give us a push forward.
Sadly, everyday also shows us why we need to keep on working and to intensify our action, since every day there are new forms of discrimination, persecution, injustice and hatred based on religious, cultural and thought diversity.
This is why, in Adyan, we work on several levels to promote pluralism: we work on the policy level, creating advocacy tools and engaging policy dialogues between different stakeholders, to promote inclusive citizenship and freedom of religion and belief. We work in education and training to raise generations on these values and give tools to young professionals throughout the MENA region to learn about diversity management and advocate for it. We work with Lebanese youth for non sectarian politics. We work with Syrian refugee children to promote a positive memory and a sense of pride of what they carry as rich cultural heritage, so that they feel that they are citizens with value to bring wherever they go. We work with religious institutions, leaders and faith-based organizations to include values of citizenship and coexistence in their discourse and teaching, and also to include human rights and women’s rights specifically, in religious laws. We also create networks of youth and of faith-based actors to promote these values in the society, and we spread them through media campaigns and on our platform Taadudiya, which means pluralism.
With the situation Lebanon is facing today, it is becoming logistically harder and harder to work each day, with electricity and internet problems, yet we and our partners keep on going.
In one of our educational programs of education on religious diversity for young children in schools throughout Lebanon, we have created videos that showcase for example how different religions in the world describe the beginning of the universe and of humankind, and posters to show children from all around the world and their rites of passage. One teacher, in a village in the Bekaa valley, in a partner public school has no electricity or material to show the video nor a possibility to print out the posters. So she acts the content of the video to the children and she draws the poster for them.
These examples keep us going, and it is to those people as well as to all the team and networks and board members and advisory members and consultants and partners of Adyan that we owe this Prize today.
This prize awards also my effort in theology, as I have worked on developing a new Islamic theology of religious pluralism, in a dialogical way with Adyan’s co-founder and Christian theologian Fadi Daou, who spearheaded the organization for nearly 15 years, and I continue working for the promotion of the role of women in theology and religious leadership.
In the face of all those who use religion as a tool for manipulation, restriction and oppression, I believe that religions and beliefs can be focused of inspiration for liberation, whether on a personal level, helping us unlock our potential to grow and bloom or on a societal level to be a voice against injustice and tyranny. But I also believe that it is our duty to reclaim religions from the fanatics and those who have made of them horrible machines of destruction. When I first wrote in Islamic theology, I kept a low profile, asking myself do I have the right, being a woman, non-veiled, not belonging to the Islamic establishment. Later when I saw that the Divine hospitality book was translated into 5 languages and being studied in Universities here in Germany and other places, and that my other book received 3 awards, I realized that not only do I have the right, but I have the responsibility to promote this new theology and religious interpretation.
This is why it means so much to me and to Adyan to receive an award named after Ibn Rushd.
A heartfelt gratitude to chairwoman Cora Josting and Hikmat Bushnaq Josting and the members of this year’s jury, who are all an inspiration: Elisabeth Kassab, Khazal al Majidi, Asma Lamrabet and Nazmi al Jubeh.
With this award you prove to us that solidarity can be transnational as well as cross-communal and you give us an amazing push in our daily combat and allow us to spread our message and testify worldwide that whatever the obstacles or dangers, the fight for diversity and for freedom is definitely worth it.