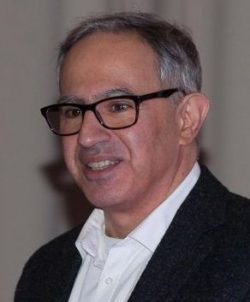 I would like to thank Ibn Rushd Fund on behalf of the Sadik Jalal Al-Azm Foundation, Amr Al-Azm and myself for organising this event.

Many of you are here to honour Sadik, the thinker, the public intellectual, the philosopher, and the teacher. Others are here in memory of a friend. I am here to honour my father.

I would like to start by saying that Sadik lived his life as he saw fit. He described his life’s journey as “prolific, full and rich, a journey which I enjoyed tremendously, a life with no regrets”. In other words, he did it his way. Just like the Frank Sinatra song.

If Sadik’s life can be divided into three stages: the sixties and seventies in Beirut, the eighties and nineties in Damascus, and the early years of the 21st century, when he divided his time between Damascus and the rest of the world, and in exile, then naturally, my relationship with my father accompanied him through these stages: the Beirut child, the Damascus teenager, and the more mature aspect of our relationship during his years in exile.

In the following I will tell you about some of my memories along this journey.

I was raised in a westernised household in Beirut and Damascus. We spoke English and Arabic interchangeably in our conversations. It was a very cultured and academic home; vibrant with ideas fuelled by my parents’ love for culture and knowledge. I was surrounded by books and art as well as academic, political and amusing discussions. The presence of activists, artists, thinkers, diplomats, etc. was common in our home. Also, we were exposed to the theatre and the ballet at a young age especially on our trips to Europe.

Beirut years
As a child I hated school and to make life even more unfair, from my perspective, I had my own two professors at home, my mother Fawz, professor of English and Sadik professor of philosophy. As  educators, they made it their duty to check my homework and made me do it again if it was wrong. Of
course, I considered this time away precious time away from my friends.

As I write these words the images of Sadik that pop up are his horseshoe moustache and him smoking cigars. My earliest memories are of Sadik playing Monopoly with my brother and I, our trips to Beirut airport to watch the planes take off and land while eating popcorn, and the obligatory Sunday visits to grandparents for kibbeh labanieh or rouz bil foul lunch, and the terrible rice pudding dessert.

Damascus years
As a teenager in Damascus, I started paying attention to the evening conversations my parents had. I particularly remember the conversations about future books and discussions about books that were being written. I remember Sadik consulting my mother on literary references in Arabic and English, and referring to her extensive knowledge and expertise of English literature and the history of the English novel.

Sadik wrote all his books by hand and I clearly remember copying by hand his drafts with his corrections onto blank sheets of paper that my mother later edited.

As any teenager, I wanted to rebel against my parents. But how do I rebel against anything when we, as children, were nurtured on Joan Baez, Bob Dylan, Johnny Cash, Joni Mitchell, the Beatles and the Rolling Stones. Since my hatred of school followed me to Damascus, Pink Floyd’s Another Brick in the Wall was my national anthem. To my surprise, not only did Sadik like this music, but also that of Iron Maiden. But I really surprised him when I started listening to Nazem Al-Ghazali, one of my favourite Arab singers. He never expected that and I realised that although he wasn’t interested in music he enjoyed listening to it.

At school I had a class in logic and philosophy. The teacher was Sadik’s student and he couldn’t understand why I was so bad at it. Since I was hopeless at the subject, Sadik took the task of helping me understand logic and the basics of philosophy. I have fond memories of Sadik doing his best to help me crack the subject. After a few attempts, I think he gave up.

Sadik taught me to drive around the age of 15. And when I had my licence he asked me to drive in the Damascus rush hour traffic in around the Umayyad circle. My ability to manoeuvre his blue Citroen 2CV through that traffic and driving his car in Damascus gave me driving skills that I still have. My first and only accident was in Damascus while my parents were away. He kept his cool when I told him what I did.

In 1988 I went to the United State to study cinema, thanks to the support of my parents. I had recommended that they go and see Peter Greenaway’s The Cook, The Thief, His Wife and her Lover. After seeing the film Sadik’s response was “I’m paying all this money so you can make films like that!”

I remember his stay with me and my housemates in Maryland. They enjoyed his company and he was a very agreeable guest.

Exile years
Whenever his world trips brought him to Europe, we would meet and enjoy a father-son coffee or meal together.

In August 2016 I conducted an interview with Sadik, one of the last that he gave, to get to know the man and the person behind the books. I had a lot of questions to ask him about his upbringing, influences, politics, about stories I had heard as a child such as how he met my mother. It was an open and frank event. I am glad that I had the chance to do this.

Finally, I am proud to announce the launch of the Sadik Jalal Al-Azm Foundation to preserve and
maintain Sadik’s intellectual legacy for future generations. Also, the foundation serves as a contact point for organisations, institutions, as well as individuals who are interested in Sadik’s scholarly work including continuing, building upon and furthering Sadik’s intellectual journey.

Also, I am delighted to inform you that we are developing academic grants for intellectual production, and funding for cultural production that reflect Sadik’s interests. These will be made public on the foundation’s official page www.sadikalazmfoundation.org

Thank you very much for being here to honour Sadik. May he rest in peace.