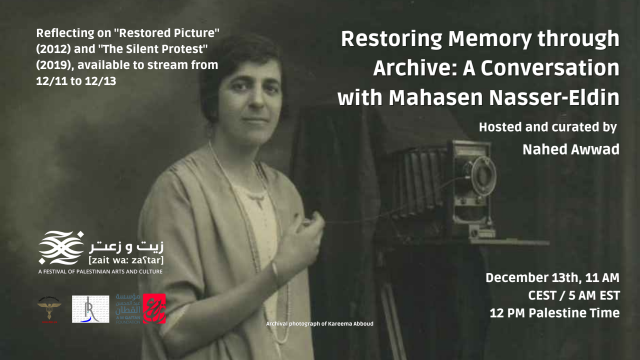 The next event of the [zait wa: zaʕtar] Festival of Palestinian Arts and Culture is coming up! Restoring Memory through Archive

After two events centering on literature, this event is featuring two short films exploring ‘archive’. Due to current Covid19 restrictions, we cannot screen them in 2020 in Moviemento, the local cinema in Berlin cooperating with us for some of the film screenings in the festival. We  plan to show these and other films in February, assuming the Covid situation will have eased by then.

And if you are still looking for presents, a cinema voucher is a great gift to give to a friend; get two, keep one for yourself., and look forward together to going out to a cinema again. For those among the readers who are in Berlin, you can get a  Moviemento voucher here:

– and if you are elsewhere, local cinemas need our support everywhere right now.

But we will not let Covid stop our festival! So now our screening will be free to watch on Vimeo from 5 pm December 11, to midnight December 13, 2020 (both times Berlin time; details see below).

We’ll keep you updated and notify you on where and how the many more events of the festival will happen.

Stay healthy, and join us on Zoom on December 13, 2020, for our next matinée to listen to Nahed Awwad and Mahasen Nasser-Eldin discussing the presence of archives in Palestinian film.

Missing Archive, missing narrative? Where is the archive of Palestine, and who owns it? How did the missing archive create a void in the Palestinian narrative and what did the Palestinians do to compensate this? In her films, Mahasen Nasser Eldin does not only search for the archive but connects it to the present in an attempt to contribute to restoring the Palestinian memory and narrative.

“Civilizations that write history are often remembered by the cultural heritage they leave for future generations. Therefore, the preservation of audio-visual heritage should be considered a national duty. Whoever controls archives and cultural collections decisively influences the writing of history – a principle that has been in evidence since antiquity.” Dr. Bashar Shammout, scholar on Palestinian archives

In this documentary film we travel between Bethlehem, Haifa, and Nazareth to explore the life of Karimeh Abbud – the first female photographer in pre-1948 Palestine. Born in Bethlehem in 1893, Karimeh rapidly rose to prominence in a traditionally male-dominated profession after receiving her first camera as a teenager. Her photos are important historical records of life in Palestine in the early 1900s.

On 26 October 1929, Palestinian women launched their women’s movement in Jerusalem. Approximately 300 women converged into the city from all over Palestine. They held a silent demonstration through a car convoy across the city protesting the British High Commissioner’s bias against Arabs in the Buraq uprising. This film tells their story.

The two film-makers will speak about one focus of their work, namely archive, at 11 am (Berlin time) Sunday 13 December: Restoring Memory through Archive.

Any donations to support our work are highly appreciated and  welcome, to our account, via paypal, or via the festival’s betterplace page.

is a Jerusalem-born filmmaker who tells stories of resistance and resilience, crafting carefully researched and scripted narratives that restore new life to forgotten figures and celebrate those on the margins of society. A meticulous researcher, Mahasen specializes in reconstructing and scripting historical narratives using audio and visual archives. Her research interest focuses on the use of film in the writing of historical narratives. Her films have screened locally and internationally.

Mahasen holds an MA degree in filmmaking from Goldsmiths College in London and another MA in Arab Studies from Georgetown University in Washington, DC. She is currently the head of the film production department at Bethlehem’s Dar al-Kalima University College of Arts and Culture.

is an independent Palestinian filmmaker based in Berlin. She has worked in films and television since 1997. Nahed received her diploma from the European Film College in Denmark and has since released eight films (experimental, short, feature length formats), eg “25km”, “Going for Ride?”, “5 minutes from home”, “Gaza Calling”; all were meticulously researched. Nahed set out on her own quest looking for a Palestinian Archive related to the Jerusalem airport, and came to realize that it can be only found in the family albums of people formerly working at the airport which they took along as they were exiled to Amman, Beirut, or Berlin. Nahed Awwad is also Zait wa Za3tar’s film specialist.

And visit the festival website, which was created exclusively for this project www.zaitwaza3tar.berlin.