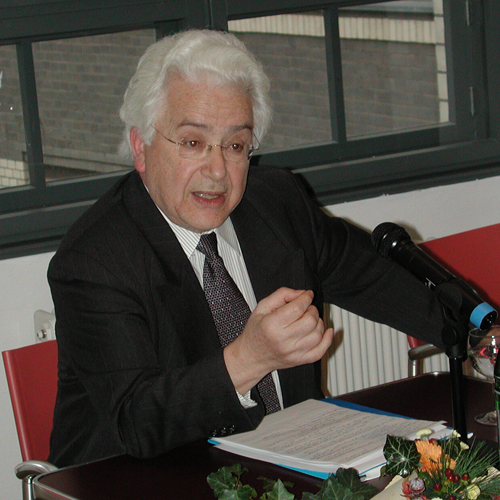 Mohammed Arkoun, one of the most prominent modern philosophers in the Arab world and an active advisor of many political, academic, religious decision makers for Islamic studies and systems of education, is explicitly opposed to the thesis of the ‘clash of civilisations’ that has been made to look so inevitable.

His approach is to bring up through archaeological “excavation” of the systems of thought and literatures emerged and spread in what he calls the Mediterranean historical space, the common anthropological ground of what is instrumentalised ideologically since 1492 (discovery of America and expulsion of Muslims from Spain) to construct the two imaginary poles “Islam” and the “West”. Each pole has constructed the other as the enemy; this mutual exclusion became a more obsessive system of thought and representations since 1945 until today. This re-reading of history of systems of theological, political and philosophical thought and cultural production through all Mediterranean space needs to be developed and taught in all contemporary societies.

Arkoun stands for more than just a dialogue between cultures, religions and philosophical attitudes; he uses a comparative anthropological and historical approach to propose a common commitment of the scientific community to open new horizons of meaning, interpretation, and understanding to build a world space of solidarity between peoples, civil societies and their respective states equally converted to a governance grounded in that common anthropological soil recognised by a scholarship and commonly shared by a world-wide consciousness of the process of concrete construction with the European Union revolutionary experience. Indeed, such a humanist vision has been felt and intellectually sketched by Ibn Rushd with the mental tools and cultural frames available in his time.

In his works, Arkoun scrutinises the cultures’ common past and their present mutual disapproval and condemnation that results mostly from what he calls institutionalised ignorance spread at an unprecedented large scale especially during the last 5O years. As an example of this new humanist vision, the Emeritus professor goes deeper in his archaeological digging the common universe of Ibn Rushd, Maimonides and Thomas Aquinas as the three symbolic Figures that will help to go further in the common effort to (re)activate the necessary intellectual solidarity that will enable us to rethink with new intellectual paradigms, all the communitarian and nationalist systems of “values” still used to legitimise so-called “just wars”.

Mohammed Arkoun’s main focus, however, is on Islamic cultures. He criticises them for being unable or unwilling to share and contribute to the construction of scientific and intellectual modernity. After the death of Ibn Rushd (1198), the intellectual project so strongly and clearly inaugurated by him following other thinkers before, has just been abandoned by the successive generations in all Islamic contexts until the second half of 20th century. He calls for rethinking radically the concept of “Islam” to put an end to so many arbitrary ideological and even phantasmagoric manipulations by all types of social actors, Muslims and non-Muslims.

Arkoun defends a more nuanced position about the current assertion that Islam never knew the separation between state and religion. He is convinced that the French concept of laïcité refers to a very original and rich historical endeavour to solve the problems related to authority and power, spiritual and secular spheres of human needs and activities, ways of producing secular law and dealing with the human experiences of the divine… It is a critical way of thinking, communicating, teaching, handling knowledge, behaving in a space of citizenship. It recapitulates all the positive irreversible conquests of intellectual and cultural modernity. For Arkoun, laïcité cannot be presented as an ideology aiming the negation, or any kind of hostility to religions as spiritual and ethical ways of education for human being. Laïcité protects religious freedom as the modern expression of the freedom of each individual consciousness. All the philosophy of human rights is included in the way of thinking and acting concretely in a modern civil society.

Thus, Arkoun’s provocative thesis is that Islamic thought and society have never had and desperately need their own renaissance to revolutionise the “Closed Official Corpus” that Islam has become especially in the last 40 years.